Who says pre-season friendlies can’t be compelling? Tottenham beat Juventus in the first game of the International Champions Cup on Sunday, and fans cannot stop talking about Harry Kane’s extra-time winner from the halfway line.

The match, which was held in Singapore, marked the first time Tottenham and Juve have met since the 2018 Champions League round of 16. Juventus, if you can recall, advanced 4-3 on aggregate. There was much less at stake during Sunday’s game, but that doesn’t mean it was lacking in action.

Tottenham started with what many would call an experimental 4-3-3 line-up, as many of the regulars began the game on the bench. Here’s the full starting lineup:

This seemed to work out at first, as Tottenham took a 1-0 lead into half time thanks to a goal from Erik Lamela. The Spurs youngsters, including the 17-year-old Troy Parrot, looked fairly impressive against Juventus, and they appeared to control most of the play in the first half. 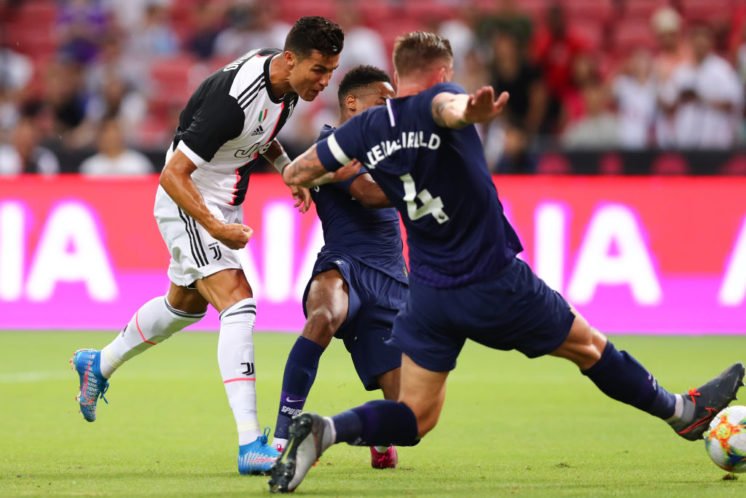 Juventus then came out strong in the second half and took a 2-1 lead when Gonzalo Higuain and Cristiano Ronaldo scored four minutes apart only 15 minutes into the half. Tottenham then countered with a few substitutions, as Tanguy Ndombele made his first appearance with the club.

Ndombele, who joined Tonttenham after a £55 million transfer from Lyon, made an instant impact when he had an assist on Lucas Moura’s equalising goal in the 65th minute.

The teams then traded chances for the next 25 minutes or so, until Kane stole the show with a stunning goal in the third minute of stoppage time. Kane took the ball at midfield, looked up and noticed Juve keeper Wojciech Szczesny off his line, and then fired a shot over his head and into the goal.

There’s no doubt that Kane’s goal, although it was scored in a pre-season game, will be one of the best we will see all season.

What’s next for Spurs?

The International Champions Cup continues as Tottenham take on Manchester United on Thursday in Shanghai. Let’s see what Kane has left up his sleeve against a Premier League rival.